CHRISTOPHER GRUNDY has become a leader in the movement to forge a new musical genre: progressive Christian worship music. For many emergent and progressive Christians, it’s a breath of fresh air.  New, evocative images, emerging theologies, inclusive and expansive language, and musical styles that draw upon folk, alt rock, R&B, and a cappella chant.

For the last two decades Christopher has been writing and playing for national, regional, and local church events, as well as at colleges, coffee houses, and benefit concerts. In that time he has developed a particular kind of thoughtful, spiritual folk, adding a few other musical styles along the way.

The music consists of sturdy, straightforward melodies that you could stand on if you needed to get something off the top shelf. With that music, however, comes a carefully crafted style of lyric that is both clear and reaching – an ongoing exploration of both the details of life and the deeper possibilities below the surface.​  Over time, Christopher’s musical work has become more closely woven together with his work as a liturgical scholar and professor of preaching and worship at Eden Theological Seminary.

Listen to an interview about Christopher’s music and creative process on Northern Spirit Radio.

CHRISTOPHER WAS BORN in Naperville, Illinois. He grew up singing in church choirs, and began performing his own songs in junior high.  Eventually he found his way to coffee houses and local church basements.

In the late 80’s he recorded a fledgling LP called “Simple Songs” while at Carleton College in Minnesota – as he says, “so I would have done it once.”   While studying at Union Seminary in New York, Christopher played at local coffee houses, but also began leading music for regional youth events of the United Church of Christ.  In 1991-92 he recorded “Lifted Into Dancing,” mostly in his parents’ family room.  After moving to Iowa to serve as a local pastor, he recorded “In This Life” in 1995. “Here in Providence” was recorded in 1999 while he was serving a church in Lawrence, KS.  By this time, Christopher had gained some notoriety at national events of the United Church of Christ, and in 2002 released “Come to the Feast,” a CD of songs composed over the course of ten years of youth events.  After completing a PhD in liturgical studies, he began teaching at Eden Seminary, and in 2012 recorded “Stepping In,” a CD of songs for worship.

Christopher currently lives with his family in St. Louis, where he serves as Associate Professor of Preaching and Worship and Associate Dean for the Chapel at Eden Theological Seminary. He continues to write and perform for churches throughout the country. 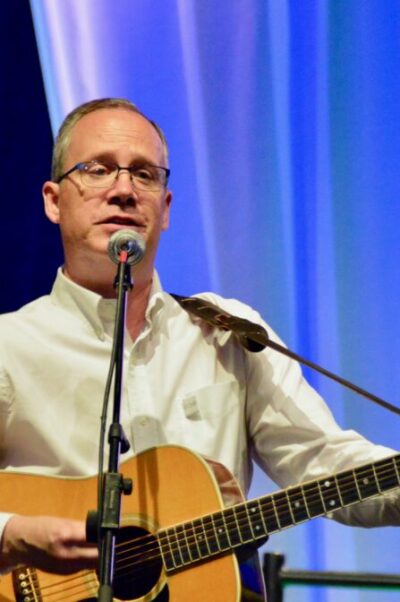 Click for high resolution photo.
“I always refer to Christopher as one of the finest composers of new music in the Church today. He has a wonderful gift for writing beautiful choruses that are wonderful musically, yet very easy to learn and sing, and his gifts with language and theological insight are also exceptional.”  – Bryan Sirchio
Christopher Grundy
Back to top